Thanksgiving: A Tradition in Peril 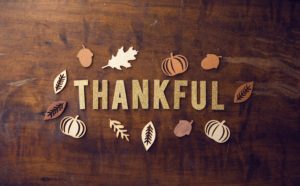 The first ever Thanksgiving was celebrated in 1621. The Pilgrims and Wampanoag Indians commemorated the first harvest in their new home. Later, in 1863 it was declared a federal holiday, and since 1941 it is celebrated on the fourth Thursday of November.

Today, many traditions are attached to this day like major parades, anticipated football games, and delicious family meals. However, it’s not the traveling, or food that has a major significance during the holiday, rather it’s the gathering and reconnecting of families and friends to give thanks

But recently, the traditions have changed. Black Friday follows the family dinners, shifting the sincerity to an obsession with consumerism. Black Friday marks the beginning of the holiday shopping, and it is often described as the busiest shopping day of the year, but where did the term come from? The earliest evidence of Black Friday was in Philadelphia around 1961 when the day after Thanksgiving the streets were very busy and traffic was disruptive due to shoppers. The phrase became more popular as it came to signify the period when retailers turned their profits from “red” to ‘black”.

For years retailers opened at 6:00 am on Friday as people anxiously waited in line and some even camped overnight in order to get the special deals of the day, for some families this became part of their tradition. However, little by little retailers have been opening earlier. In the last years, stores started to open on Thanksgiving Day as early as 5:00 pm, thus ruining the Thanksgiving celebration for those that have to go to work and taking away the meaning of the day. Nowadays with the earlier opening hours plus the increase in online shopping, even the term Black Friday is losing its meaning as there is less foot traffic in stores. Is it worth it? Do retailers make more? What is more important, a doorbuster or a belly buster with friends and family?

According to Best Black Friday, nearly 60% of shoppers don’t agree with stores opening on Thanksgiving. The National Retail Federation says 36% of people start holiday shopping in November. However, the site Shopper Tracker says that Thanksgiving openings do not lead to more overall purchasing. So does the decision to open early reflect the shopper’s desire, or what is best for retail?

Even though we all want to score a great bargain,  we should prioritize family This Thanksgiving, count your blessings and not your bargains. Share some down time with your loved ones, and if your craving for shopping is too strong to stick to the Friday shopping, the discounts can wait.